Marmalade is the new Kadena standard for NFTs, addressing a long-standing concern plaguing NFT markets today, which is the inability to enforce requirements on the sale of NFTs. The Pact language’s unique “pact” functionality and Marmalade’s modular “policy” based infrastructure powers this solution, which opens doors to horizons of new ways to use, build, and trade NFTs.

To learn more about Marmalade try these recommended readings:

One of the main features of an NFT is the ability to pay royalty to the original creator with every transaction. This is one of the best appeals for creators to create an NFT because they can consistently profit off of trades. However, many protocols only put royalty payments at the exchange it was sold at, instead of the royalty being based on the transfer price. This structure leads to the royalty sometimes being not paid or diminished.

Marmalade solves this problem by using pacts, which are multi-step processes defined in the smart contract. An NFT sale consists of the following: 1) A seller listing an NFT for sale with a price in some coin. 2) A buyer giving the coin to the seller. 3) The seller transferring the NFT to the buyer.

Due to nature of pacts, they ensure that these steps happen in order, completely eliminating any possibility of an improper transfer or unpaid royalty. This step by step process, called a policy, can even be defined for cross-chain transfers, making Marmalade all the more powerful.

Fungibles: Fungibles are able to replace or be replaced by another identical item; mutually interchangeable. Money is fungible because one dollar bill is identical to another dollar bill. In this case, the item itself holds the value. Other examples of fungibles are cryptocurrencies (such as KDA) and stock options.

Poly-fungibles: Kadena’s NFTs are poly-fungible. In current Ethereum based NFTs, creators can create a certain amount of NFTs to put into a marketplace, and cannot change that amount in the future. Kadena’s NFT protocol, Kip-0013, allows NFTs to be split into multiple tokens. For example, I can release one NFT into marmalade, and three years later, I can make that one NFT fracture into 50 fractionalized tokens.

This is the concept of poly-fungibility, the fractionalization of an NFT. Because of poly-fungibility, creators have the ability to start with scarcity of a certain NFT in the market by putting out less NFTs, and then update the smart contract of the NFT to fractionalize it and allow multiple people to own a scarce NFT. This key feature allows for functionality of concepts like a decentralized autonomous organization (DAO), where holding a fraction of a NFT can enter owners into a DAO for managing a certain asset.

Obviously, creators can create and mint NFTs through Marmalade and Kadena. However, Marmalade takes minting one step further and allows users to mint entire marketplaces. Massive collections of NFTs can form “marketplace communities” by sharing a common approach to ownership and sale in the smart contract. Since the contracts allow for creation of multiple NFTs, creators can mint entire marketplaces instead of individual NFTs.

The reason Marmalade allows for this is because Kadena is the only scalable proof of work blockchain, meaning gas prices will be very low no matter how many NFTs are minted. This allows creators to create NFTs on a very large scale without hefty gas prices.

Marmalade is a protocol composed of an ecosystem of modules/smart contracts that are live on the Kadena Chainweb network. In this tutorial, we will be diving into the details of creating and transacting tokens in this protocol. 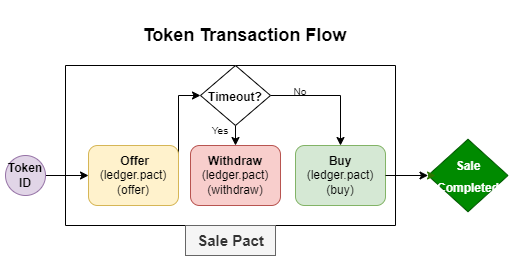 The purpose of the manifest is to create the underlying data, called the manifest, of the token that a creator is going to sell.

Create URI: The Manifest starts with creating the URI using the uri function, which has parameters scheme:string data:string. This function forces the user to create an object of proper schema based on the NFT. For example, suppose we have an image in the JPEG format. The URL of the image would be inputted for the scheme and data can be the image data in the format of a key. This would create the URI for the image.

This is what creating the URI of a JPEG image would look like:

This code is for a JPEG, but it can be replaced with anything else. I could create my own schema with "data": "orange" and “scheme”: ”marmalade”.

Create Datum: Then, the user creates the datum. The datum is created using the create-datum function, which follows the mf-datum schema and takes the datum (in the form of an object) and uri as the parameters. The URI is the same as the URI created in the step before. The datum is some kind of data about the NFT in the form of an object (objects are created using the following format: {“type1”:”data1”, “type2”:”data2”, …}.

Creating datum can look as follows:

Create Manifest: This is the final, most crucial step of creating our token/NFT. The create-manifest function takes the URI and data as parameters and returns the manifest of the token.

What is a Policy: The essence of a Marmalade token is its policy. A policy is the mechanism for the creator to specify their unique requirements for how their token can be sold. This is what enables the creator to enforce requirements such as royalties. However, a policy is nothing more than a smart contract module that is deployed to the Chainweb.

To create a token, the user must deploy their own policy onto the blockchain or use a policy that has already been deployed to the Chainweb (examples of these policies below).

Some policies that have already been deployed as part of the Marmalade Ecosystem are the guard policy, the fixed quote policy, and the fixed quote with royalty policy. All policies, whether they are custom made or already deployed by marmalade, must conform to a standard interface called kip.token-policy-v1, which can be viewed here.

Creating a Token: Creating a token in Marmalade is relatively simple. All the token creator has to do is call the create-token function, which has parameters of id (this is the name of the token), precision (this is how you want to fractionalize your token), manifest (the token manifest that we created earlier), and policy (in the form of a module that follows the kip.token-policy-v1) format.

Before the call, however, we have one more step. The create-token function has a delegated call to the enforce-init function in the policy module. Because of this, we need to pass the execution environment data to the blockchain through the command call.

This is due to policies’ customizable nature, which allows them to enforce different parameters. For example, one policy might need an amount for royalty whereas another might need a specific keyset to allow token purchases.

Here is an example of the creation of a fixed quote policy token:

Here is an example of the creation of a guard policy token:

The function call looks as simple as this:

A tutorial on minting a PFT with limited supply, fixed quote, and royalty.

If you haven’t already, you will need to make a Chainweaver wallet. Go to this tutorial if you need help building one.

Although storing data on-chain is possible, and recommended for certain use cases, to save on-chain storage for this tutorial, we’re making use of another super cool technology called Inter-Planetary-File-System AKA IPFS, which is a decentralized storage protocol. There are many different IPFS gateways that can be used such as Infura, Pinata, etc. In this tutorial, we will be using Pinata due to its ease of use. 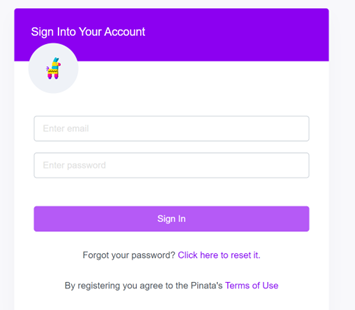 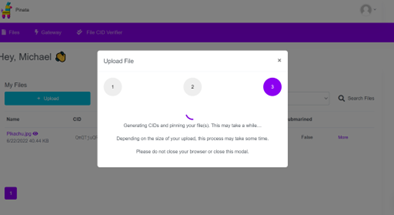 And once done, your file is pinned on the decentralized IPFS!

Nothing as Cold as a Mint​

The token manifest is the data we want to bind to the token. In this case we would want to bind the lookup URL to the image we uploaded to the IPFS in part one, and maybe some other data like the token’s name and description too!

a. Create the URI and datum

Uri: The contract that we are calling for manifest creation is called kip.token-manifest. However, in the code snippets below, we replaced it with a contractAddress placeholder.

To use the already created kip.token-manifest contract, all you have to do is replace contractAddress with it.

The scheme parameter is usually filled with the encoding/type of the URI data and the data parameter is the data itself. URIs are usually used to store on-chain data, but since our image is getting stored off-chain (in IPFS!) we can freely choose what we fill in here.

The createUri function calls Pact.fetch.local, which is a function that calls a specified non-signing/read-only contract call to the blockchain. Information on the function can be found here.

In this case it is calling the .uri contract function which simply parses the parameters into a suitable URI object.

Datum: A datum is simply a singular piece of information. This information could be anything we want to embed with the token (ex. Something about versioning). In this case, with an image, we would want to add the IPFS URL, a title, a description, and some other details. An example datum for marmalade-tutorial.art Token would be:{ “Name”: “marmalade-tutorial.art”, “Description” : “Marmalade tutorial token”, “imageUrl” : “https://gateway.pinata.cloud/ipfs/QmR8ZWmRj8Rh5kCRwcRr6AaiPTf8AjWeGxVJ6KjGjhwqPQ” }

b. Create manifest: This is the final part to creating the manifest. Simply pass your URI and datum array (you can add as much datum as you want) into the manifest.

This manifest is simply used to store data about the token. Calling this function adds the hash onto the URI and datum. If this data is ever changed, the hash would be different, so it gives us a way to identify the original.

To create a token, you only need the precision, the token name (id), the private key of the creator, the policy, and the parameters to pass into the policy. The policy is the most important part of the token because it dictates factors such as royalties and how to buy/sell.

Congratulations, you have learned the inner workings of Marmalade and know how to mint an NFT. Now get out there and have fun building!