Set up and Deploy a Local Test Server

Welcome to this introduction to the Pact local Test server!

The goal of this tutorial is to help you run and deploy a working Pact test server locally.

Topics covered in this tutorial

In this tutorial you will go into depth on the pact-lang-api including topics like yaml API requests and endpoint types. Aside from letting you explore even more of pact’s functionality, it puts you in a good position to complete our next tutorial, Pact and JavaScript. In that tutorial you bring all the pieces together and get your first look at developing your first full stack blockchain application with pact.

Set up and Deploy a Local Test Server Tutorial​

Pact and the pact-lang-api are required to successfully complete this tutorial. If you haven’t already installed these, follow the steps below to install each of them on your device.

First, install Pact on your computer using homebrew by running the following code in your terminal.

Install the pact-lang-api by running the following code in your terminal.

You can view more about installing the Pact Lang API here. Further details about the pact-lang-api are here.

To get started, here is a brief overview of the project you will build. The goal is to run a Pact server locally that you can communicate with using various pact-lang-api commands from your terminal. 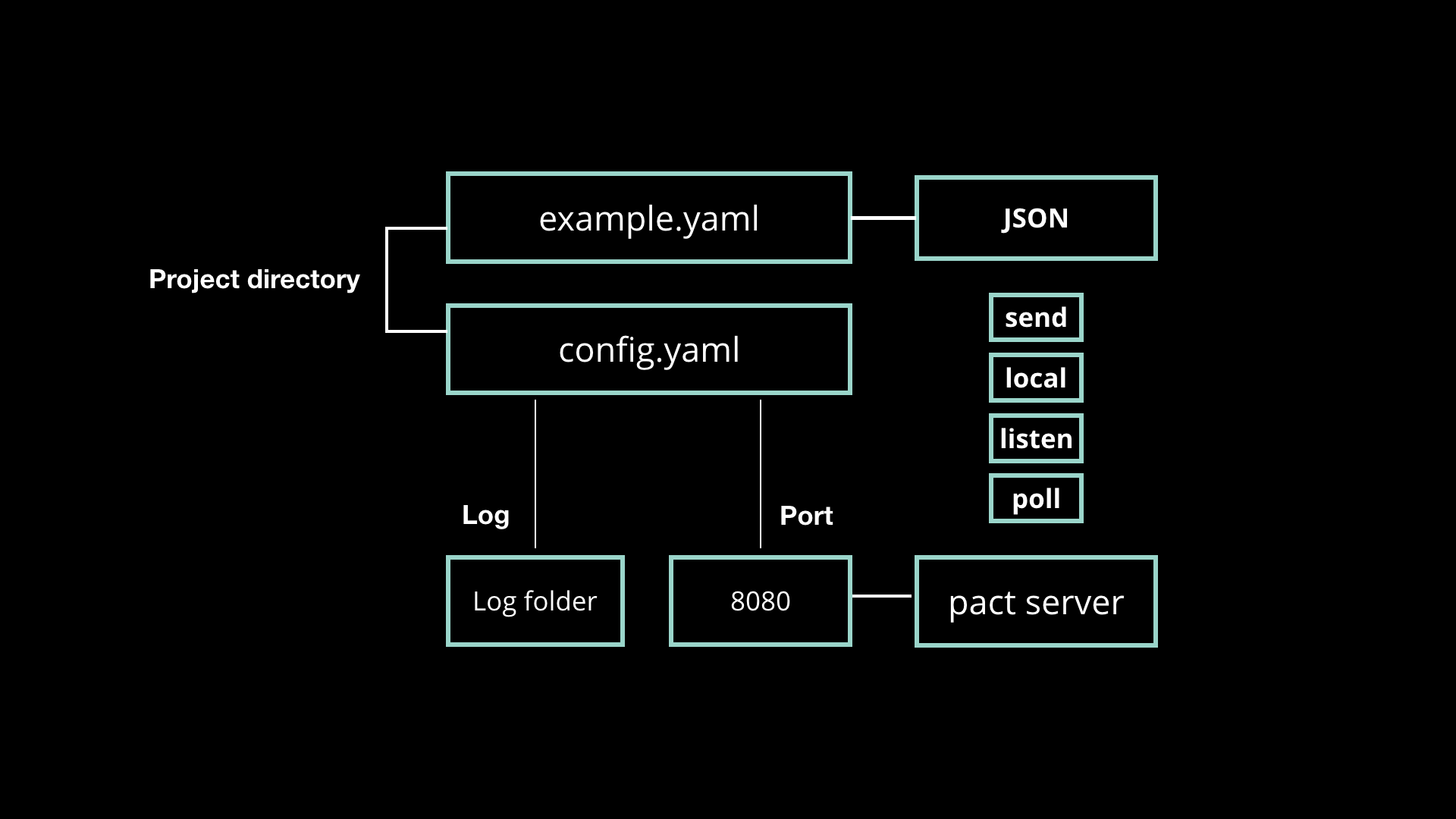 Next, you will populate each of the yaml files, create the log folder, and run the Pact server.

After the server is running you will need a way to send the code in the example.yaml file to the pact server. This is done by first converting the code into JSON, then by sending this json to the server using a variety of commands including send, local, listen, or poll depending on your needs.

I’ll show you each of these commands in more detail as we go through the tutorial. For now, this hopefully helped you organize some of your thoughts around what we are planning to build.

To begin your project, open your terminal and navigate to your preferred project directory.

Within that directory, create a new directory named deploy-tutorial to house your project files.

Navigate into the folder and create both a config.yaml file and an example.yaml file.

The config.yaml file follows a standard format, and you can find the code for this here. It is also included below.

Copy the code below into your config.yaml and save the file.

Next, populate the example.yaml file with the example provided below. This code is also included in the Pact language documentation here.

Copy this text, paste it into your example.yaml file, and save the file.

Navigate back to the config.yaml file to view the details of this code.

Here you can see 5 fields.

Navigate back to the example.yaml file to view the details of this code.

Here you can see the code that will be running on the Pact server. In this case it includes the code 1 + 2, the name Stuart, and the language Pact. You can also view the keyPairs for this code.

Here you’ll see that the format includes keys such as code, codeFile, data, dataFile, keyPairs, nonce, from, and to.

Each of these have their own use case but only the code and keypairs are required. Looking at your example.yaml file, you can see that these 2 keys are included.

Some things to note are that if you use the data key it defaults to an empty object, and nonce defaults to the current date and time. Other details about each of these keys can be found in the documentation.

Having seen the code, you can now focus on working from the terminal.

To start, you’ll need to create the log folder that was specified in the config.yaml file as the log directory.

From your terminal, create a log folder in your project directory.

Next, check the directory to make sure you’re all set up with your log and yaml files.

After running this you can see that you initialized a pact server and that it’s currently running on port 8080.

You can now run API calls on the server.

The Pact server contains multiple endpoint types that you can access using the pact-lang-api.

To get more familiar with each of these endpoints, we can run each of them from our terminal now.

Now that the Pact server is running, you use your terminal and the pact-lang-api to /send code to the Pact endpoint. /send takes in cmd object and returns tx hash. To run this command you need to do 2 things. First, you will format the existing example.yaml file into JSON. Next, you will send it to the Pact end point.

In a new terminal window within the same directory, run the following code.

This line formats the example file into type JSON.

After running this command, you should see the JSON data appear in the terminal.

Now that you have the data in the format you need you can send it to the REST endpoint.

To send data to the REST endpoint, you need to use a curl command with a header of content type application json along with server and endpoint.

Run the following command in your terminal to /send data to the REST endpoint.

This command starts with the code you ran previously and adds on a few important details.

First, it states the content type as application/json. It then sets the destination of the API call. In this case it sends an API call to the localhost on port 8080/.

By running this full command you’re both converting the file to JSON and making an API request call to the /send endpoint.

After running this command, you will receive request key as the response. This is the hash value of the command you sent to the REST endpoint.

Note: The hash value shown above is different than the one you will receive.

Using the pact-lang-api, you can also run code and return the result of running that code.

This is done using another command, known as /poll.

/poll is similar to listen but works with multiple hashes and returns multiple tx results.

Run the following command in your terminal. Note that you will need to include the requestKeys by pasting the key you received when running /send into the space labeled <REQUEST-KEY>.

The code you run should look end up looking similar to the command shown below.

As you may have noticed, you don’t need to convert the yaml file into JSON as you did when using /send. This is because you are sending the request key which is already in JSON format.

This command will return the result of the request made in the /send demo as shown below.

Listen is similar to poll in that it can request the result of a transaction.

/listen takes in a hash and returns tx result.

The format of a /listen command looks like this.

This command returns the result of the request made in the /send demo.

As you may have noticed, /listen is similar /poll.

The difference here is that you are listening to the hash value and that you are making an API request to the listen endpoint.

What you’ll get back, like with poll, is the result of running the code, which is again 3.

/listen and /poll are very similar in this case but use /listen in cases that you only need to take in the result of a single hash and return a single transaction result. Use /poll if you need multiple hash values and multiple results.

The final command you can use to access the Pact REST endpoint is /local.

/local takes in cmd object with code that queries from blockchain - only runs in local server and does not impact the blockchain - and returns tx result.

The format of a /local command looks like this.

This command is structured very similar to send. It converts the exampl.yaml file to JSON then makes an API request to the local endpoint. When running this, you’ll see that it returns data along with the request key.

/local takes in the cmd object with code that queries from blockchain. It only runs in the local server and does not impact the blockchain when returning tx results.

This is helpful to use when running a function that doesn’t need to touch the blockchain. This is different than /send, which you would use when changing data in the blockchain, or when deploying contracts. Local is a great choice when you are working with simple functions or fetching data from the blockchain.

At this point you hopefully have a local Pact server running and have some practice with running commands to access the variety of endpoints available to you.

We’ve set up a challenge to help you get even more familiar with setting up YAML files for your local pact server deployments.

On the Kadena GitHub page, there is a repo named pact-lang.org-code found here that includes the code samples and challenges used throughout our tutorials.

You can clone this folder to get started with this challenge.

From there navigate into the folder intermediate > set-up-and-deploy > challenge.

Your challenge is to acclimate yourself to the project structure and use what you’ve learned to both deploy the smart contract and call the helloWorld function.

Here’s a quick recap of what you accomplished throughout this tutorial.

Starting in your terminal, you created a project directory along with an example.yaml and a config.yaml file to store your code. You then populated each of these files with their code. You then created a log folder that holds the data from the Pact server and then ran the server on port 8080.

After the server was running you converted the example.yaml file into JSON, then used curl commands to send it to the Pact server; either to store the data or to read the result of running it’s code.

And that’s everything you need to know to set up and deploy your local test server.

Good luck with your challenge, and when you’re ready, I’ll see you in the next tutorial.